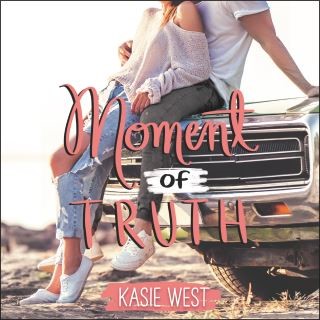 Beloved author Kasie West once again delivers a witty, lighthearted romance that will charm her legions of fans and is perfect for readers of Jenny Han and Huntley Fitzpatrick.

At sixteen, Hadley Moore knows exactly who she is—a swimmer who will earn a scholarship to college. Totally worth all the hard work, even if her aching shoulders don’t agree.

So when a guy dressed as Hollywood’s latest action hero, Heath Hall, crashes her swim meet, she isn’t amused. Instead, she’s determined to make sure he doesn’t bother her again. Only she’s not sure exactly who he is.

The swim meet isn’t the first event the imposter has interrupted, but a little digging turns up a surprising number of people who could be Heath Hall, including Hadley's ex-boyfriend and her best friend’s crush. She soon finds herself getting caught up in the mysterious world of the fake Heath Hall.

As Hadley gets closer to uncovering the masked boy’s identity, she also discovers some uncomfortable truths about herself—like she might resent the long shadow her late brother has cast over her family, that she isn’t as happy as she pretends to be with her life choices…and that she's falling for the last guy she ever thought she would like.

Kasie West lives with her family in central California, where the heat tries to kill her with its 115-degree stretches. She graduated from Fresno State University with a BA degree that has nothing to do with writing. Visit her online at www.kasiewest.com.