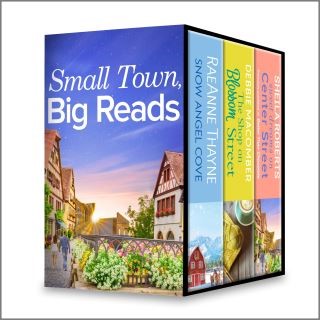 Curl up and escape to three charming small towns with this box set of bestselling reads! Three heartwarming stories to start your next binge-read, together for the first time. Featuring Snow Angel Cove, The Shop on Blossom Street and Sweet Dreams on Center Street (previously published as Better Than Chocolate).

Nothing short of a miracle can restore Eliza Hayward’s Christmas cheer. The job she pinned her dreams on has gone up in smoke—literally—and now she’s stuck in an unfamiliar, if breathtaking, small town. Rescuing Eliza is pure instinct for tech genius Aidan Cain and putting the renovation of his lakeside guest lodge in Eliza’s hands assuages his guilt—until he sees how quickly he could fall for her. Having focused solely on his business for years, he never knew what his life was missing before Eliza, but now he’s willing to risk his heart on a yuletide romance that could lead to forever.

There’s a little yarn store in Seattle called A Good Yarn. For the owner, Lydia Hoffman, it represents her dream of a new start—life after cancer. Lydia teaches knitting to beginners, and three very different women join the first class. The lesson is to each make a baby blanket, though separately, creating this craft is a chore to be tackled, a gesture of reconciliation, or an act of hope. As the lives of these four women knit together, they make unexpected discoveries—about themselves and each other. Discoveries that lead to understanding and acceptance, to laughter and friendship.

Sweet Dreams Chocolate Company has been in the Sterling family for generations, ever since Great-Grandma Rose literally dreamed up her first fabulous recipe. But now it looks as if they’re about to lose Sweet Dreams to the bank—and that would be a disaster, not only for the family but for the small town of Icicle Falls, Washington. Can Samantha, the oldest daughter and new head of the company, come up with a way to save it? After some brainstorming, inspiration strikes. They’ll have a chocolate festival! Time’s running out, but the Sterling women are determined and the town’s behind them, so everything’s bound to go smoothly…

Discover your next favorite series, and enjoy a break to small towns where everyone helps out and love is just around the corner.

RaeAnne Thayne: New York Times bestselling author RaeAnne Thayne finds inspiration in the beautiful northern Utah mountains where she lives with her family. Her books have won numerous honors, including six RITA Award nominations from Romance Writers of America and Career Achievement and Romance Pioneer awards from RT Book Reviews. She loves to hear from readers and can be reached through her website at www.raeannethayne.com.Sheila Roberts lives on a lake in the Pacific Northwest. Her novels have been published in several languages. Her book, Angel Lane, was an Amazon Top Ten Romance pick for 2009. Her holiday perennial, On Strike for Christmas, was made into a movie for the Lifetime Movie Network and her novel, The Nine Lives of Christmas, was made into a movie for Hallmark . You can visit Sheila on Twitter and Facebook or at her website (http://www.sheilasplace.com).Debbie Macomber is a #1 New York Times bestselling author and a leading voice in women’s fiction worldwide. Her work has appeared on every major bestseller list, with more than 170 million copies in print, and she is a multiple award winner. The Hallmark Channel based a television series on Debbie’s popular Cedar Cove books. For more information, visit her website, www.debbiemacomber.com.