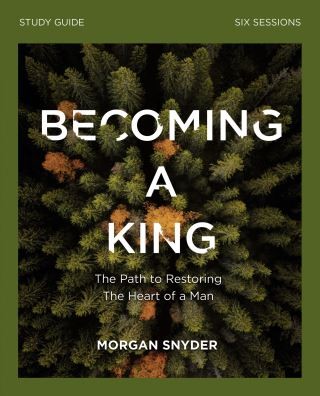 Can God Entrust His Kingdom to You?

Masculinity is in need of restoration. But how do you become the kind of man – the kind of king – to whom God can entrust his kingdom?

In this six-session video Bible study, journey with Morgan into a process that helps men recover true courage and vulnerability.

Curated and distilled over more than two decades, and mined from the lives of over seventy-five sages who have gone before us, Morgan shares what he discovered: an ancient and reliable path to restoring the heart of a man and becoming the kind of man who can wield power for good.

Designed for use with the Becoming a King Video Study (9780310115267), sold separately. Streaming video also available.

Morgan Snyder is a grateful husband of twenty years and a proud father of a wildly creative and witty daughter and a joyful and passionate son. He serves as a strategist, entrepreneur, teacher, writer, and speaker. His passion is to shape the men and women who are shaping the kingdom of God. In 2010, he established BecomeGoodSoil.com, a fellowship of leaders whose global reach offers guidance for the narrow road of becoming the kind of person to whom God can confidently entrust the care of his kingdom. Morgan serves on the executive leadership team at Wild at Heart and Ransomed Heart Ministries and has contended for the wholeheartedness of men and women alongside John and Stasi Eldredge for more than two decades. He has led sold-out Wild at Heart men’s events across the United States, United Kingdom, South Africa, and Australia. Morgan goes off the grid every chance he gets, whether bowhunting in the Colorado wilderness or choosing the adventurous life with his greatest treasures: his wife, daughter, and son.