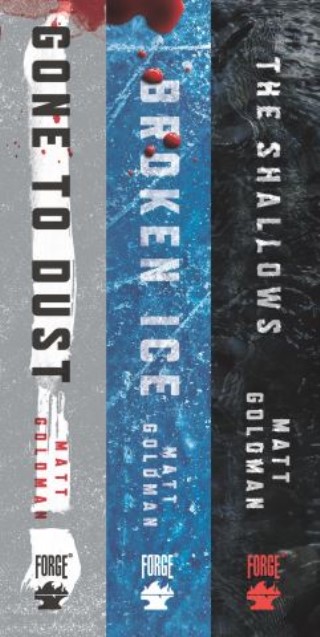 This discounted ebundle of the Nils Shapiro Series includes: Gone to Dust, Broken Ice, and The Shallows.

Gone to Dust: A brutal crime. The ultimate cover-up. How do you solve a murder with no useable evidence? Private detective Nils Shapiro is focused on forgetting his ex-wife and keeping warm during another Minneapolis winter when a former colleague, neighboring Edina Police Detective Anders Ellegaard, calls with the impossible.

Broken Ice: Nils Shapiro has been hired to find a missing teenager. Linnea Engstrom could be anywhere, and someone doesn’t want her found. Is Linnea a victim, or is she playing a dangerous game? As bodies start piling up, the clues lead Nils and Ellegaard north to Warroad, MN, a small, quiet town with many secrets to hide.

The Shallows: A prominent lawyer is found dead, tied to his own dock by a fishing stringer through his jaw, and everyone wants private detective Nils Shapiro to protect them from suspicion: The unfaithful widow. Her artist boyfriend. The lawyer’s firm. A polarizing congressional candidate. A rudderless suburban police department. Even the FBI.

At the Publisher's request, this title is being sold without Digital Rights Management Software (DRM) applied.

Matt Goldman: New York Times bestselling author MATT GOLDMAN is a playwright and Emmy Award-winning television writer for Seinfeld, Ellen, and other shows. He brings his signature storytelling abilities and light touch to the Nils Shapiro series. Goldman's debut, Gone to Dust, has been nominated for the Shamus and Nero Awards and was a Lariat Adult Fiction Reading List selection. He lives in Minnesota with his wife, two dogs, two cats, and whichever children happen to be around.