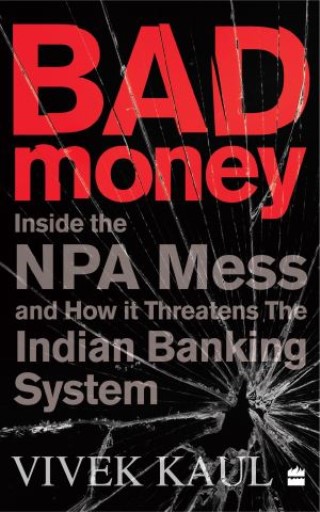 Bad Money: Inside the NPA Mess and How It Threatens the Indian Banking System

Over the last decade, Indian banks in general and the government-owned public sector ones in particular have gradually got themselves into a big mess. Their bad loans, or loans which haven't been repaid for ninety days or more, crossed Rs 10 lakh crore as of 31 March 2018. To put it in perspective, this figure is approximately seven times the value of farm loan waivers given by all state governments in India put together. And this became the bad money of the Indian financial system. Why were the corporates unable to return these loans? Was it because they had no intention of doing so? Who were the biggest defaulters of them all? Are Vijay Mallya and Nirav Modi just the tip of the iceberg? How much money has the government spent trying to rescue these banks? How are the private sector banks gradually taking over Indian banking? Is your money in public sector banks safe? How are you paying for this in different ways? And what are the solutions to deal with this? In Bad Money, Vivek Kaul answers these and many more questions, peeling layer after layer of the NPA (non-performing assets) problem. He goes back to the history of Indian banking, providing a long, deep and hard look at the overall Indian economy. The result is a gripping financial thriller that is a must for understanding a crisis that threatens our banking system and economy.

Vivek Kaul: VIVEK KAUL has worked in senior positions at the Daily News and Analysis (DNA) and The Economic Times. He is the author of four books, including the bestselling Easy Money trilogy on the history of money and banking and how that caused the financial crisis that started in 2008 and is still on. India's Big Government: The Intrusive State and How It Is Hurting Us, his fourth book, was published in January 2017. Kaul is a regular columnist for Mint, BBC, Dainik Jagran, Firstpost, Bangalore Mirror and the Deccan Herald. He has also appeared as an economics commentator on BBC, Mirror Now, CNBC Awaaz and NDTV India. He is a regular guest on 'The Seen and the Unseen', one of India's most popular podcasts. He speaks regularly on economics and finance and has lectured at IIM Bangalore, IIM Indore, IIM Kozhikode, IIM Visakhapatnam, NMIMS and the Symbiosis Institute of Media and Communication, among others. Kaul lives in Mumbai and loves to read crime fiction in his free time.